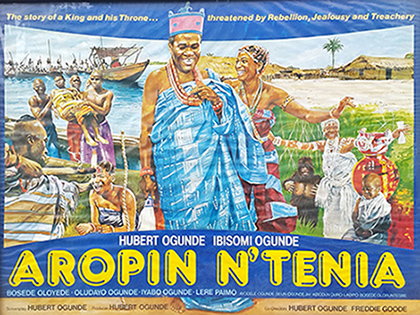 
Once upon a time, there was a king who had two wives – OYENUBI and ADESOLA. OYENUBI is the senior wife. As much as the people love the king he had no heir. This is a taboo in this town.


The important chiefs in this town were ABORE, PAMIPAMI and ERELU. ERELU was the only female chief in this town. The chiefs, PAMIPAMI and ABORE did not love this king because he was honest and kind. He also refused the chiefs or anybody to be cheated.

The Ode-Nla festival is the most important festival celebrated in this town. It was during this festival that the king went to the Ita-Oba to pray for the whole town. ABORE. PAMIPAMI and ERELU went to worship the town’s ‘god’ at the shrine of the town. It was also the time people in town marry. It was traditional for the king to also pick a new wife.

During one of these Ode-Nla festivals, the king married a new wife called EFUNTAJOBO. EFUNTAJOBO had a senior brother named OGUNDARE who had a friend called OMISORE.

At the shrine where ABORE, PAMIPAMI and ERELU went, ABORE turned upside down what the ‘kolanut’ had predicted. ERELU objected but there was little she could do because only the ABORE was authorised to interpret what the ‘kolanut had predicted. When they returned to the palace, ABORE said the town’s ‘god’ at the shrine said the king must vacate the throne until he can produce a male child as heir to the throne. He also said the ‘god’ told them, the chiefs should run the affairs of the town until the king’s prayer is answered. The king accepted and left the throne. Even after the ERELU came back that night to tell the king what actually transpired. The king believed that ABORE will not deliberately misinterpret the ‘kolanut’ at the shrine.

A little while after the king had vacated the throne one priestess of the sea god’s came to commiserate with the king. She advised the king to come and worship the sea god with his three wives. The king accepted her advice.

Since ABORE and PAMIPAMI started to administer the affairs of the town, their evil deeds manifested itself. As they deposed the ERELU and ABORE was taking people’s wives, OMISORE claimed that PAMIPAMI was setting fire to people’s farms! Their evil deeds were so rampant that the king was very angry but there was little he could do. ABORE nearly beat OMISORE and OGUNDARE to death when they tried to take back OMISORE’s wife who ABORE forcefully took.

The king and his three wives went to the shrine of the sea god to worship. After the sacrifice, the priestess of the sea god gave the three wives some herbs to cook with yam porridge. She appealed to them to eat the yam porridge together. But when it was cooked, OYENUBI shared the yam porridge so disproportionately that EFUNTAJOBO, the youngest wife, was given only a small piece of yam! Even though EFUNTAJOBO was very angry with the sharing she accepted her fate.

A few months, after eating the porridge EFUNTAJOBO became pregnant. When OYENUBI and ADESOLA saw this they vowed to do something about it. They did not succeed until the day of her delivery when realising that they were the only two to deliver EFUNTAJOBO’s child. After the delivery OYENUBI replaced the child with a STONE AND THREW THE REAL CHILD INTO THE LAGOON. When the king was told that EFUNTAJOBO gave birth to a stone he was horrified and quickly summoned the chiefs and elders of the town. The king then ordered that EFUNTAJOBO be killed but ABORE and PAMIPAMI waved this judgement to imprisonment in the OGIDIKOKO forest. The forest is where thieves are thrown for wild beats to eat instead of mercifully beheading them. With the stone in a calabash EFUNTAJOBO was escorted by two chiefs to the entrance of OGIDIKOKO forest.

A year or so after EFUNTAJOBO had gone into the forest, her father fell ill and the son –OGUNDARE offered to go into the forest to obtain some herbs. While cutting the herbs he heard two henchmen discussing how they plan to kill EFUNTAJOBO in the OGIDIKOKO forest. He engaged them in a fight and eventually succeeded in killing one of them. He went to give himself up at the palace but not before, the henchman who escaped had reported the incident. Although, the king ordered OGUNDARE to be tied to the ‘OGUN” shrine, the ABORE wanted him beheaded. But, the king overruled him having been warned by the priest. OMISORE later succeeded in realising OGUNDARE. They both ran into the forest. When PAMIPAMI heard he sent some if his henchmen after them.

One day, about four years after EFUNTAJOBO had been sent into the OGIDIKOKO forest, a boy emerged from the sea after a brief storm. This boy headed for the village and eventually sat in the shrine in front of the king’s palace. All the villagers and the king came out to see and question the wonder boy. The boy refused to answer any question. The king then sent for the priestess of the sea god who replied through the messengers sent by the king that the child should be fed with crabs and oysters till she came. She promised to visit the village four days hence.

When the priestess came she performed some rites in front of the whole village including EFUNTAJOBO who had mysteriously found her way into the village. She asked the boy a few questions to which he replied that he had come to join his mother. The priestess then asked him to pick his mother. To the surprise of all he picked EFUNTAJOBO who was immediately clothed and chosen as the regent’s mother.

The priestess of the sea god then narrated to all present all what ABORE and PAMIPAMI had done. She also accused the king’s wives – OYENUBI and ADESOLA of throwing the new born into the sea. The king then ordered that the two wives be thrown into the sea with stones tied around their necks. Both the ABORE and PAMIPAMI took to their heels but ABORE was caught and beheaded while PAMIPAMI hung himself with a rope in the forest.

The king, EFUNTAJOBO and the wonder boy –ORIADEKIIGBE then danced happily and lived ever after with ORIADEKIIGBE succeeding the king.