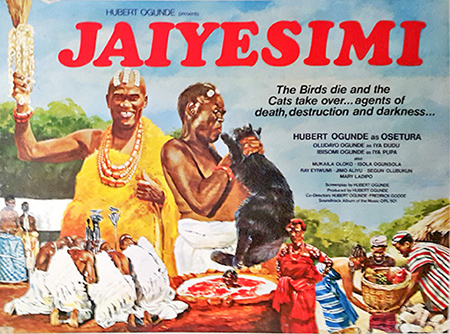 
A long time ago, in a village, there lived a chief priest called OSETURA. He was the religious, traditional and political head of the village. This chief wages perpetual war with witches wherever and whenever he found them. After a particularly bloody battle he defeated them and there was peace in his village.


However, unknown to him, the head of the witches – IYA DUDU did not die along with the others when they tried to summon the spirit of OSETURA. IYA DUDU escaped injured and went home to start a new cult with a new medium of evil – a CAT.

The earlier medium of the witches was the bird. This evil woman having succeeded into a black cat went back into the grave to awaken IYA PUPA who was the second in command. Together they set about recruiting in and around their village.

In another village nearby were two friends –POROYE and OMISANDE. Both were traders selling clothes. Although OMISANDE was the more successful one, she had the misfortune of having only one child –AIYELAGBE having lost her earlier four children in strange circumstances. Also, in this village were another two friends – ODUBANJO and TALABI who were building contractors. They often worked on the same job no matter who got the contract.

OSETURA had only one daughter called ODUYEMI who fell in love with DELE – a young and popular weaver in the village. ODUYEMI had a friend called EFUNNAIKE. AWODEYI, DELE’s close friend and confidant wanted EFUNNAIKE as wife.

ODUBANJO secured a building contract. As usual TALABI was invited to join him. Few days after they have started the work, TALABI intentionally harmed ODUBANJO so that he could do the work alone. When ODUBANJO was well enough he confronted TALABI at the construction site and a fight ensued. ODUBANJO was chased away but he went to report TALABI to the chief in charge of the area. After ODUBANJO had left, IYA DUDU appeared and promised to help TALABI against ODUBANJO.

The chief in charge of the area, Chief OSIPITAN however reversed his earlier judgement in favour of TALABI after taking a bribe from him. ODUBANJO not satisfied with the change of judgement took the case to OSETURA.

One day as POROYE was crying over her ill fate, IYA PUPA approached her and she confided in her that she suspected OMISANDE (her friend) was behind all her problems. IYA PUPA promised to help her if only she would join her cult.

Chief OSIPITAN, one of OSETURA’s disciples later fell in love with IYA PUPA’s daughter – BULUGBE. IYA PUPA saw this as a way of getting at OSETURA’s secrets. She therefore refused to let her daughter marry Chief OSIPITAN at first. Chief OSIPITAN had to betray OSETURA in order to gain her consent to marry BULUGBE.

Meanwhile DELE’s wedding date to ODUYEMI had been fixed and preparations were in top gear. But EFUNNAIKE was secretly unhappy and on the morning of the wedding day she confessed to her mother. EFUNNAIKE’s mother gave her a comb which she was to use at the ceremony. This she used and there was confusion at the wedding as DELE simply walked out on everybody. ODUYEMI was shattered and in fact EFUNNAIKE was the chief consoler.

One day OSETURA was conferring with his disciples OMISANDE rushed in with her only child who was very sick. OSETURA took the child and asked her to go and bring some her child’s clothes. OMISANDE rushed home to find her house on fire. POROYE, her friend, was amongst those helping to put out the fire.

OSETURA made a sacrifice with the help of his disciples to drive out evil spirits who were suspected to be back in the village. AMUSAN was asked to carry the sacrifice to a far away forest. But as soon as he left, Chief OSIPITAN ran to IYA PUPA and told her what OSETURA was up to.

The following day, as OSETURA and others were awaiting the arrival of AMUSAN; his corpse was brought back by some farmers who saw it under a fallen tree. Annoyed OSETURA went into his secret chamber where he discovered that the witches were back. He immediately declared war on them.

No sooner than he slept that he got up in a trance and started to destroy all his charms. He later regained consciousness and attempted to catch the two cats – BLACK and RED which he found in his room but he could not and went back into his secret chamber. With some incantations he caught the red cat which he strangled and simultaneously the RED witch died in her house. OSETURA then took the fight to the BLACK witch in her pit of blood. There he killed the BLACK witch whose house caught fire as soon as OSETURA left.

Victorious, OSETURA performed the town cleansing ceremony the following day. It was during this ceremony that DELE was told by ODUYEMI that EFUNNAIKE was killed by a wall which fell on her.